Cuba: So Close, and Yet Worlds Away

When the plane touched down in Havana to an eruption of thundering applause, I knew this wasn’t going to be a typical travel photography trip. What was the applause for? A smooth landing? The thought of reuniting with family members? Hmm, I didn’t know exactly, but that was my first indication that this trip was going to be different – there was a sense of excitement and anticipation throughout the plane. So whatever the reason for the applause, let the adventure begin!

Of course just the fact that I was able to travel to Cuba at this time was cause for great anticipation on my part. I’ve personally always been intrigued by this country. We’re only 90 miles apart, and yet we seem to be worlds away in our ideologies and way of life – but really how different are we? I wanted to find out, and I was lucky enough to get a special visa with a small group of fellow curious and very worldly photographers (after working this for a year). With the announcement by the Obama administration a few months earlier in December 2014 that the U.S. was going to try to normalize relations with Cuba, it produced a boundless amount of speculation about the future. We haven’t had normalized relations between our two governments in over 50 years, so this was truly a momentous occasion. That announcement automatically catapulted Cuba to the cusp of potentially massive change, and now, just a few months later, nobody knows yet exactly what this will mean. What we do know is that there is renewed hope and a sense of excitement, on the part of both the U.S. and the Cuban people. As I later learned from our Cuban guides, there were celebrations the day of the announcement as if it were a holiday. I could tell by the way our guides described this that it was a very emotional time for them, as it continues to be. Putting politics aside, I could see that the people were separate from their government, and I could also see the optimism that was now in their faces. Many Cubans have relatives living in the U.S., and the love they show for all Americans is unmistakable. And so I shared their excitement and hope. 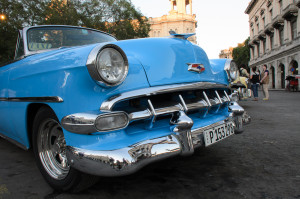 Back to the trip. The juxtapositions in Cuba are seemingly everywhere. Amidst a sea of old vehicles – yes, many U.S. models from the 1950’s – I actually saw newer vehicles and even some expensive ones as we left the airport (Audis and the like). And as we drove around later that first day in the crowded streets of Havana, it became apparent that the majority of their majestic buildings were crumbling all around the residents, while a very few buildings that were lucky enough to escape that fate were being restored to their magnificent original glory. Sadly though, much of the city was only showing a glimmer of a much more elegant and profitable past. It was very clear that much of the city’s beautiful architecture would probably crumble to the ground before anything could be done to stop it. Even if the U.S. could step in and help with infrastructure development over the next few years, it would be an absolutely massive undertaking that would have to be done one building at a time. 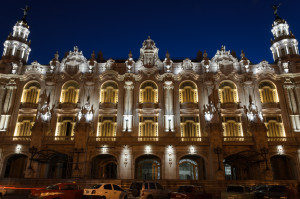 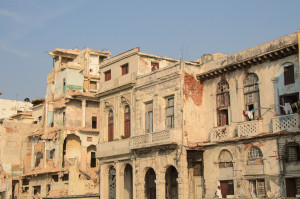 But the largest juxtaposition to me was that the people were nothing like what I expected (not that I truly knew what to expect before I arrived). I suppose it’s somewhat natural to fear things that you don’t understand, but I think the fear that some Americans have about Cuba has more to do with the form of government than it does the people themselves. The people are actually the friendliest, most approachable people I have ever encountered in the world, and they also seem to be some of the happiest. They’re eager to engage with you, not afraid of a camera, and have an appreciation for arts and culture (including photography). They live humble lives, but they are certainly proof that a lack of material possessions doesn’t have to impact your outlook on life in a negative way. Through this optimism and their inventive nature, they find ways to make everything work, from living on the equivalent of a typical $25 per month salary to keeping those beautiful old cars running. 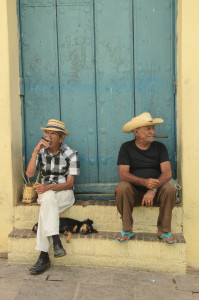 Cuba is a travel photographer’s paradise. The capital city of Havana has all of the things that you might expect: old American cars from the ‘50’s, incredible architecture, music from morning ‘til night, and an incredible amount of activity to catch your attention at every turn. I don’t do much street photography typically, but just a walk down almost any street in Havana could turn you into a street photographer. I also had the opportunity to travel outside of Havana to primarily two other places: the town of Trinidad, a World Heritage Site, and to Vinales Valley, which is much more rural. Trinidad is a quaint town of cobblestone streets (they are literally everywhere) and a slower pace (but very touristy). I found Vinales Valley to be both naturally beautiful and very interesting, since it’s the center of tobacco farming and production for the island. Although we stayed in a couple of very nice hotels that had all of the comforts you might expect, leave those hotels and you are quickly reminded that you are still in a third world country – make sure to bring your toilet paper with you! Because you cannot necessarily freely “go and do” whatever you’d like, our group was part of an arranged “people to people” exchange, which showcased a variety of cultural endeavors and of course showed Cuba and its people in a positive light. 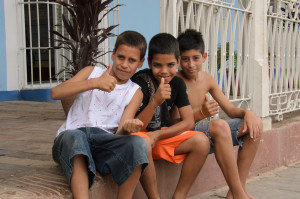 Because we really don’t know what impact the normalization of government relations will have on Cuba or how quickly anything might change, I was ecstatic to have the opportunity to travel there now, to document things as they are today. I’m sure that Cuba will retain its unique culture and much of its charm no matter what, but it’s uncertain what things may undergo dramatic change if cruise ships start traversing their ports on a regular basis and resorts start popping up on the island.

And so do I really know why the applause on the plane broke out? No, maybe I’ll have to find out on my next trip (there WILL be a next trip). But I can say this – as the applause happened again upon landing back in Miami, I thought, I don’t know why this is, but I just love that they find a reason to be happy about the smallest things. It’s hard to bring across the infectious positivity of the Cuban people, so I guess you’ll just have to find out for yourselves. Viva la Cuba!